In November, the United States Department of Transportation (US DOT) announced that Atlantic City would receive $10.3 million as part of the Rebuilding American Infrastructure with Sustainability and Equity (RAISE) discretionary grants program. The grant award will help to fund the Atlantic City Corridor Revitalization and Safety Project, which aims to implement Complete Streets improvements on approximately 2.7 miles of Atlantic Avenue. The project will include a road diet, ADA accessible sidewalks, drainage facilities, new bike lanes, traffic signal synchronization, LED streetlighting, and improved accessibility at transit stops.

Supported by the RAISE funds, the project will enhance safety and provide alternative transportation options for residents and visitors who travel for work, school, medical appointments, recreational activities, and other daily activities.

The below article, originally posted in July 2021, describes several planning activities that helped lead to this successful Federal grant award. 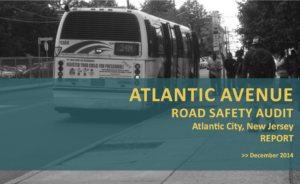 The Atlantic Avenue Road Safety Audit was performed by a multidisciplinary team that analyzed high incident areas along the route, courtesy NJDOT

Atlantic City, well known for its resorts, casinos, and boardwalk, has a large share of residents who use alternative transportation modes daily: about 30 percent of its residents use public transit and 17 percent walk to work. On centrally-located Atlantic Avenue, high pedestrian volumes and a disproportionate number of traffic incidents have prompted several studies to determine the scope of needed infrastructure improvements to support pedestrian and bicycle safety and address deficiencies for vehicular travel.  New Jersey Department of Transportation (NJDOT), and the South Jersey Transportation Planning Organization (SJTPO), the regional Metropolitan Planning Organization, in partnership with the City, supported these studies to analyze conditions along the route and to make recommendations for a safer corridor.  The decade-long planning process for the Atlantic Avenue corridor provides an example of collaboration between the municipality, SJTPO and NJDOT to implement safety improvements for all roadway users.

The planning process used strategies such as Data-Driven Safety Analysis and Road Safety Audits that are supported by the Federal Highway Administration (FHWA). Many of the study recommendations include safety countermeasures that FHWA has promoted through its Every Day Counts (EDC)-4 and EDC-5 Safe Transportation for Every Pedestrian, or STEP, Innovative Initiative. These strategies include Leading Pedestrian Intervals, Crosswalk Visibility Enhancements, Pedestrian Crossing/Refuge Islands, and Road Diets. The EDC program identifies proven and underutilized innovations and promotes rapid deployment.

Atlantic Avenue is a major thoroughfare through the center of Atlantic City. The street is 69 feet wide, with four travel lanes and a fifth lane at some intersections for turning. Along the corridor, there are retail and commercial centers, a bus terminal, healthcare facilities, and a public library. Eleven bus stops, each accommodating up to ten different bus routes, provide frequent transit service and contribute to high pedestrian volume. The Atlantic City Rail Terminal is situated several blocks to the Northeast, adding to pedestrian trips.

Due to high foot traffic, and the nature of the roadway, this segment of Atlantic Avenue saw 829 crashes in a five-year period, from 2013 to 2017. Compared to the rest of the municipality, three times as many incidents involving pedestrians, and twice as many involving cyclists occurred along this 2.65 mile stretch. Recognizing the ongoing challenges, leaders and transportation planners at both the City and the South Jersey Transportation Planning Organization (SJTPO) initiated the process to study safety improvements for this important corridor.

Following NJDOT’s adoption of a Complete Streets policy in 2009, Atlantic City passed its 2011 Complete Streets policy to promote consideration of the safety of all roadway users in infrastructure planning. The resolution mentions the need to improve safety for cyclists and all users of a street, such as the elderly, non-drivers, and the mobility impaired. It acknowledges, too, that incorporating pedestrian and cyclist infrastructure can simultaneously reduce traffic congestion and fossil fuel emissions. The 2011 resolution and policy supports the City Planning Department’s goals of improving bicycle and pedestrian safety and accessibility, enhancing economic development, and developing initiatives to increase residents’ knowledge of safe bicycle and pedestrian travel (Atlantic City Resolution No. 917). According to the Plan, “Pedestrian safety is imperative not only because each of us becomes a pedestrian as part of every trip, but also because creating safe walkable streets is critical to the success of the City redevelopment and tourist efforts.” However, the document notes that, at the date of publication, there were no dedicated bicycling facilities in Atlantic City. (Atlantic City Bicycle and Pedestrian Plan).

The 2013 Plan suggested several alternatives for street design interventions in Atlantic City. On Atlantic Avenue, Alternative 1 involved removing a lane of travel in each direction, widening the median, installing buffered bike lanes between Ohio and Maine Avenues on the corridor. In the same stretch, Alternative 2 proposed using parking as a buffer for bike lanes abutting the curb on each stretch. The report concluded by calling for the formation of a task force of stakeholders to discuss the implementation of such road diets. 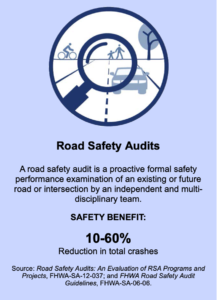 RSA's were one of the safety countermeasures FHWA promoted through EDC-4 and EDC-5, courtesy FHWA

The following year, the Transportation Safety Research Center (TSRC) at the Rutgers Center for Advanced Infrastructure and Transportation (CAIT), in collaboration with the South Jersey Transportation Planning Organization (SJTPO) and the City of Atlantic City, conducted a road safety audit of the most heavily trafficked portion of Atlantic Avenue, between South Carolina and Michigan Avenues. This study analyzed dangerous intersections in depth along the Atlantic Avenue corridor.

Road Safety Audits (RSA) are one of FHWA’s proven safety countermeasures. An RSA, conducted by a multi-disciplinary team that is independent of the design team, considers all road users and their capabilities and limitations. Findings are documented in a formal report and, while they do not constitute engineering studies, require a response from the road owner. RSAs can result in a 10-60 percent reduction in crashes.

According to FHWA, advantages of an RSA include:

Based on crash data, the RSA identified pedestrian “hot spot” and corridor locations along Atlantic Avenue, between Mississippi Avenue and Virginia Avenue. The study looked at crashes according to time of year, week, and day; lighting conditions; collision type and severity; and intersection. 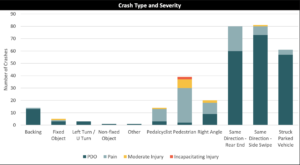 Many of the incidents involved vehicles striking each other in the same direction, one motivation for the road diet, courtesy SJTPO.

NJDOT provides network screening lists to the three Metropolitan Planning Organizations which identify hot spot and corridor locations based on crash data. The RSA analysts took this data for the SJTPO region and then worked to identify the source of the crashes by examining geometric and physical characteristics of the location. The process involved looking at types of crashes and other details to establish patterns, and then suggesting countermeasures to address those problems. These hot spot lists are crucial to securing federal funding for infrastructure improvements such as the proposed road diet.

The Road Safety Audit identified issues, such as signal phasing, roadway maintenance, and lack of bicycle facilities, and made recommendations. Like the 2013 Bicycle and Pedestrian Master Plan, the 2014 Road Safety Audit provided two road diet alternatives, suggesting the removal of one lane to accommodate bike lanes and a median with a turning lane. Road diets are promoted by FHWA as a safety countermeasure that improves speed limit compliance, reduces crashes, and provides a space for enhanced bicycle and pedestrian facilities. 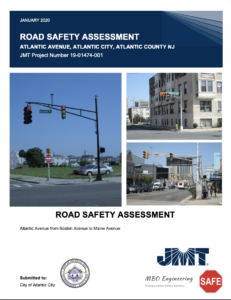 A final Road Safety Assessment was performed in 2020, recommending a road diet, with a median and protected bike lanes, courtesy City of Atlantic City

Building on the findings of the 2014 report, consultants in 2019 conducted a data-driven analysis of the conditions along Atlantic Avenue from Boston Avenue to New Hampshire Avenue, and recommended safety countermeasures to improve pedestrian safety, reduce the frequency of vehicular collisions, and improve traffic flow.

The 2020 Atlantic Avenue Road Safety Assessment looked at all crashes along the entire corridor, by crash type (pedestrian, bicycle, parked vehicle), and by intersection. Consultants also conducted travel time runs during each of the corridor’s scheduled signal timing schedules. They engaged in site visits to look for causes of crashes and to observe the condition of the roadway infrastructure, and then developed statistical observations and recommendations from their findings.

Overall, they found a lack of consistency on the roadway that resulted in unpredictable driving conditions. In one example, poorly timed signals caused drivers to try to “beat” the light, which, in combination with poor pedestrian visibility and infrastructure, led to collisions.

For a recommendation, the consultants cite NJDOT guidance for bikeway selection. At the current vehicle traffic figures (Annual Average Daily Traffic 15,000) and an 85th percentile speed of 35 mph, NJDOT recommends a Buffered Bicycle Lane, Separated Bicycle Lane or Shared Use Path. The report presented two preferred options, Alternatives #5 and #6, each of which involve removing a driving lane and adding a median; Alternative #6 would place the bikeway between the curb and parked cars, to decrease the chance of “dooring.” These alternatives recall those suggested by the 2013 Master Plan.

Twelve years after Atlantic City passed its Complete Streets policy, a road diet will be built, extending the length of Atlantic Avenue. The four-lane road will be reduced to two travel lanes with a center median. Protected bicycle lanes will be located between the travel lane and curbside parking, in both directions. Other countermeasures to be implemented echoed those called for in the 2013 Bicycle and Pedestrian Master Plan, including leading pedestrian intervals, traffic signal heads with backplates, and targeted left turn restrictions. According to City Engineer Uzo Ahiarakwe, improvements to some intersections will include bump-outs to decrease the distance that pedestrians need to cross Atlantic Avenue, synchronization of traffic lights, higher visibility crosswalk striping, and ADA-compliant curb cuts.

Atlantic Avenue’s road diet conversion and additional infrastructure improvements will cost between $8 and $10 million. The City expects to cover 10 percent of the project cost and to receive federal funding for the remaining 90 percent. The project is set to go out to bid in Fall 2021 with construction due to be complete in Summer 2022 (Brunetti).