On April 21, 2022, the NJDOT Bureau of Research hosted a Lunchtime Tech Talk! webinar, “Research Showcase: Lunchtime Edition!”. The event featured three important research studies that NJDOT was not able to include in the NJDOT Research Showcase virtual event held last October. The Showcase serves as an opportunity for the New Jersey transportation community to learn about the broad scope of academic research initiatives underway in New Jersey.

The three research studies focused on evaluation and testing of the performance and durability of materials and pavement for use in transportation infrastructure. After each presentation, webinar participants had an opportunity to pose questions to the presenter.

In cold-weather areas, water freezes and thaws in the subgrade layer of the soil and causes weak zones in the subgrade that affect surface layer performance. These weaknesses appear as pavement surface distress and cracking. To protect the subgrade, insulating material is used. 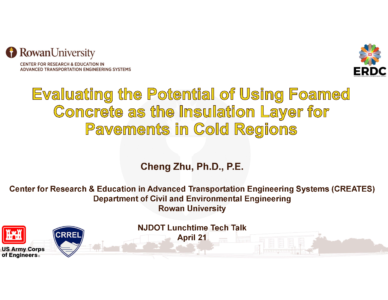 Extruded polystyrene (XPS) boards are commonly used as insulation but face deterioration over time with water infiltration, and installation is time-consuming and labor-intensive. This study looked at the potential for using foamed concrete as an alternative material. The study also looked at the methodology of selecting optimum parameters that balance mechanical strength and insulating effect. When density is low, more air bubbles provide more insulation, but more density gives higher mechanical strength.

Some of the results found through laboratory testing and large-scale testing using a soil box, include: foamed concrete with higher density has a higher compressive strength, thermal conductivity, and a lower porosity; to ensure the subgrade layer remains unfrozen, there is a minimum insulation thickness needed for a foamed concrete layer; increasing the depth of the insulation layer will achieve a better mechanical performance, while also increasing the frozen depth; and using a foamed concrete with a higher density results in a better mechanical performance.

Several questions were posed to Dr. Cheng after his presentation:

Q. Were you able to find an optimal thickness and depth combination in this research?
A. We have some recommendations for the specific material used in this study. We have a design table that we can share for the foam concrete material but was not included in this presentation. We did a comparison among several insulation materials including foamed concrete, tire chips, foamed glass aggregates, and XPS board.

Q. Was the insulation box used to create the sample box replicated in the real life soil scenario?
A. We used XPS board around the sides to minimize heat transfer and to ensure heat transfer process in this test is vertical. In reality, the heat transfer in pavement is in the vertical direction.

The use of HFST can improve surface friction in road pavements around curves to reduce lane departure crashes or on steep declines to improve braking. With HFST, hard angular stone is glued to the pavement surface in less than a ½ inch application. The aggregate of choice, calcined bauxite, is applied using epoxy. HFST must be applied to pavements in “good” or better condition (i.e. with no cracking or rutting).

There can be situations where pavement appears to be in good condition, but is not a good candidate for HFST. In 2018, in studies on two county roads, overlays showed signs of premature deterioration, probably due to previously undetected issues. It was determined that a prescreening protocol was needed to determine substrate conditions before HFST is applied. The study developed an effective prescreening tool that assesses the compatibility of asphalt and epoxy. Field core samples would be used to evaluate pull-off strength and relative asphalt binder properties.

The study also explored High Friction Chip Seal as an alternative to HFST. In a case study, an asphalt-based binding system was shown to be more compatible with the pavement than epoxy resin. Aggregate from local sources proved to be an acceptable substitute and less expensive than bauxite.

Following the presentation, Dr. Bennert responded to questions asked through the chat feature:

Q. What is the life expectancy of HFST? Is it suitable for places with higher traffic volumes?
A. If a road carries high traffic volumes, it is probably designed without horizontal curves and steep declines that might require quick braking. Some areas in Pennsylvania and lower volume highways have used this application. Pavement life expectancy is debatable but generally depends more on the level of traffic volume than years in place. At around a million passes, pavement starts to show raveling, in part due to the effects of UV on epoxy, but aggregate also debonds. Applications can lose friction quickly, an aspect that we are concerned with for its safety implications as well.

Q. Is there any difference in the noise with HFST?
A. In applications using aggregates that point upwards, there is a slight increase in noise at the tire-pavement interface, similar to noise resulting from other microsurface applications in place around the state.

Q. Anything similar to high friction chip seal in use elsewhere in the country?
A. No. We were one of the first to consider this particular application. We worked with the asphalt binder supplier and did some laboratory work and looked at durability. Chip seals have been used in other areas of the country in areas where friction is an issue, but chip seals have not been specifically designed as a friction treatment as this one is.

Influence of Cracking and Brine Concentration on Corrosion and Chloride Content. Aaron Strand is a Ph.D. Candidate in the John A. Reif, Jr. Department of Civil & Environmental Engineering at New Jersey Institute of Technology and recently defended his Ph.D. Dissertation successfully.

Throughout the U.S., agencies are using increasing amounts of salt and brine to counter road icing. Corrosion is an expensive problem for highway bridges. In reinforced concrete bridges, the primary cause of deterioration is chloride-induced corrosion. The focus of this study was the effect of surface-applied chlorides through road salting, typically using rock salt or brine. The research showed that the effect varies dependent on the condition of the bridge deck. 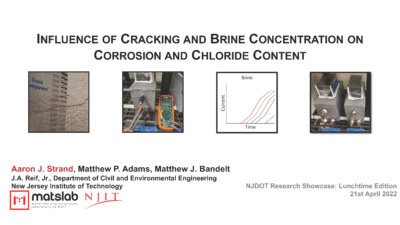 The research explored whether current testing takes into consideration the amount of salt placed on the roads, salt placement cycles, and the current condition of the bridge deck. Chlorides can affect the bridge steel reinforcement through diffusion from the surface, and through cracks in the bridge deck. The variables explored were salt brine concentration and degree of cracking and their effect on the corrosion time of bridge decks. Testing was undertaken in the lab and from core samples from a large-scale bridge deck specimen.

Ongoing work based on this preliminary study includes testing of other concrete mixture designs, testing other rebar types, and developing a model for the amount of chloride content and corrosion current process. Looking at other concrete designs.

Q. Among the cracked samples, did the higher brine solution show faster corrosion? What was the rate?
A. They all really showed corrosion immediately, at least in the macrocell test, but the rate was not shown. Going back to the total corrosion, six percent showed a quicker rate, but the other three passed the threshold at the half-year mark. There might be a decrease in the time to corrosion as the brine is increased, but it’s maybe not as much as would be expected from such an increase.

Q. How would you like to see your research findings used to inform bridge design, operations or maintenance in the future?
A. The testing we do shows how mixtures might perform together. For actual application-based work, we need to be more careful about the testing of the materials. For example, we know very little about how incorporating changes is in brine concentration might impact corrosion.

A recording of the webinar is available here.