A Pedestrian Hybrid Beacon (PHB) is a signalized, pedestrian-activated device designed to increase crossing safety. A recent study conducted by the New Jersey Bicycle and Pedestrian Resource Center (BPRC), funded by NJDOT, examined the efficacy and public awareness of PHBs in New Jersey. The authors, researchers from Rowan and Rutgers universities, found a persistent need to better educate motorists and pedestrians in New Jersey on the PHB and its phases.

Pedestrian Hybrid Beacons are one of FHWA’s seven Safe Transportation for Every Pedestrian (STEP) countermeasures, proven methods of reducing pedestrian collisions. STEP was promoted through multiple rounds of the FHWA’s Every Day Counts (EDC) Program. A PHB is typically placed to improve pedestrian safety at uncontrolled and mid-block crossings, in locations with high pedestrian demand and wide roadways. The treatment consists of two signal arms on each side, with pedestrian “push buttons” and a crosswalk. The PHB operates in five phases. In the first, the PHB’s signal is off. The second phase begins when a pedestrian activates it by pressing a button, prompting the signal to flash a yellow light. Then, for the third phase, the flashing transitions to a solid yellow light, communicating to drivers that they should prepare to stop. Then the light turns red, and, in the fourth phase, the pedestrian signal changes to “Walk.” After an interval, the fifth phase begins: the pedestrian signal displays a countdown timer, and the traffic signal flashes alternating red lights, telling drivers to stop and that they may proceed if the crosswalk is clear.

The study’s literature review found multiple examples of prior research demonstrating the efficacy of PHBs. In the case of Tucson, Arizona, where one of the first PHBs was deployed in the United States, one study found a 69 percent decrease in pedestrian-related crashes in the signal area. Another analysis in Tucson found a 97 percent yielding rate from drivers at PHB-equipped crossings. One of the chief findings from the literature review was that PHB signal evaluations were lacking in New Jersey. Thus, researchers aimed to more systematically analyze PHBs in the state. 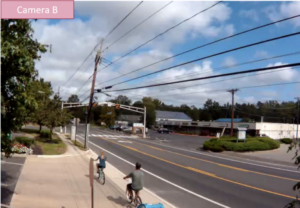 One commonality observed in all three locations was an apparent confusion for motorists concerning the fifth phase, in which the signal flashes red, indicating that drivers should stop and then proceed with caution. In New Brunswick, 100 percent of observed motorists remained stopped, even after the intersection had been cleared. In Morristown, the vast majority of pedestrians (91.3%) failed to use the PHB during the morning period, and also failed to do so in the evening (83%). The authors attribute such behavior to the PHB timing being linked to two nearby traffic signals, contributing to extra delay after the crossing button has been pressed. When inconvenient, it seems, pedestrians may opt to cross on their own.

To better understand the familiarity of pedestrians and motorists in New Jersey with PHBs, the researchers designed an online survey that was sent to 79,567 randomly selected email addresses from 30 communities across the state. While respondents indicated some confusion as to how PHBs functioned, a plurality indicated that they would be very likely or somewhat likely to support  implementation in their own community. A majority of respondents (85.9%) reported that they had never heard of PHBs, and later indicated that completing the short survey had increased their knowledge of the safety treatment, showing the potential benefit of more public education about their functionality.

The report concludes by stating that while PHBs are proven to be effective at increasing pedestrian crossing safety, a lack of public awareness on the part of both drivers and pedestrians currently limits the effectiveness of these devices. The researchers suggest updating the New Jersey Motor Vehicle Commission’s Driver’s Handbook to include the PHB, and to differentiate the flashing red signals at a PHB where the driver must yield and then proceed if the crosswalk is clear, from the flashing red signals at railroad crossings where the driver is required to stop and remain stopped. This addition could be complemented with a public education campaign to teach pedestrians and drivers about the intricacies of Pedestrian Hybrid Beacons.

The New Jersey Bicycle and Pedestrian Resource Center (BPRC) works to promote a safer and more accessible walking and bicycling environment in the state. The Center, located at the Alan M. Voorhees Transportation Center at Rutgers, is supported by NJDOT through funding from FHWA. Further information technical assistance, resources for Complete Streets, and current research is available on the BPRC’s website.