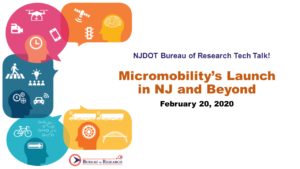 The NJDOT Bureau of Research hosted a Tech Talk! Event, Micromobility’s Launch in NJ and Beyond, that explored the current state of micromobility as a shared transport option in the U.S. and highlighted recent research on cities that have begun to develop and/or refine policies for their bike share and e-scooter programs. In New Jersey, Hoboken and Asbury Park have been on the leading edge by piloting micromobility programs. The speakers presented each city’s experiences with bike-share and the introduction of e-scooters, as well as the demographics of usage, user satisfaction, and community receptivity. Discussion of the nuts and bolts and the challenges of ramping up shared mobility options included: needed infrastructure improvements; marketing and education to attract users and promote safety; law enforcement; and staffing, funding and revenue sharing. The event was held in the NJDOT Multipurpose Room on February 20, 2020.

What is micromobility? The presenters agreed that micromobility includes transportation devices such as electric scooters, bikes and e-bikes to travel shorter distances generally in urbanized areas, often to or from another mode (e.g., bus, train or car).  These modes of transport tend to be associated with first-mile/last-mile use (i.e. to and from public transportation).  While not required, users typically rent e-scooters or bikes for a short period of time using an app. The devices are most suitable for operations in well-marked or protected spaces, such as bike lanes, and are operated by a single person at a time.

Charles Brown, MPA, CPD, Senior Researcher, Alan M. Voorhees Transportation Center, Rutgers, The State University of New Jersey. Mr. Brown discussed findings from two recent studies on bike share and e-scooter programs in the United States recently prepared by the NJ Bicycling and Pedestrian Resource Center.  The first part of his talk was on Evaluating the Spatial Equity in Bike Share Systems.  He began by defining equity, and framed the research as asking the question of whether low-income and minority populations enjoy the same range of transportation options available to other populations.  In this study, the research team examined the equity dimension of docked bike share systems in ten of the largest systems in the U.S.  He described the eight socioeconomic variables used as predictors and two dependent variable measures of bike availability — station density by area or station density by population — used to assess the spatial equity of major bike share systems. His presentation included GIS maps and bar charts to aid in visualizing equity disparities within each system and to compare systems. His talk included a rank order of the relative spatial equity of each of the major bike share systems; this methodology and scoring was also used to benchmark the three NJ-based bike share systems in Jersey City, Hoboken and Asbury Park.

The E-Scooter Programs: Current State of Practice in US Cities report explores the state of practice for e-scooters in 11 cities in the U.S, taking into consideration applicable state and local regulations, access and equity concerns, and other aspects of managing e-scooters, with an ultimate goal of identifying best practices for incorporating e-scooters as a micromobility option in NJ communities.  Drawing from the report’s major themes, Mr. Brown offered several tips for implementing E-Scooter Share Programs in NJ, touching upon operational regulations and permitting requirements, managing the right-of-way, equitable service standards, public engagement and education, and data reporting.

Ryan Sharp, AICP, PP, Director, Transportation and Parking, City of Hoboken, NJ. Mr. Sharp began his presentation with a discussion of Hoboken’s experience with bike share since the program began in 2013. Hudson Bike Share currently has 40 stations, over 300 bikes, and over 10,000 active users during the peak season. When considering where to locate docking stations, the city solicited public input and mapped areas of public housing, communities of concern, and those residents living the greatest distance from transit. Funding for the program comes from sponsorships for each bike, membership and fare revenue, and advertisement. Bikes are generally used for first and last mile trips.

Hoboken’s e-scooter pilot program began in May 2019 and ramped up quickly. In the first month, the city’s scooters had the highest usage rate in the world for several days. Mr. Sharp discussed safety issues that arose and the need for regulations and education to address underage riders, where and when to ride, speed limit, and parking. An internal e-scooter task force developed several strategies to address these concerns. The city conducted a survey of shared e-scooter use that showed reduced motor vehicle use among e-scooter riders.

Michael Manzella, AICP, PP, Director of Transportation, City of Asbury Park, NJ. Mr. Manzella noted that in this popular shore destination, bike share and e-scooters alleviate parking problems and provide a transportation option for the one-third of the city’s population who are carless. The city introduced a bike share program in 2017 which now has 8 stations with 40 bikes and consistently increasing usage over time. They have located stations in all four quadrants of the city so that people can access the convention hall, boardwalk, downtown, and rail station. Infrastructure is critical to program success and they have striped over four miles of bike lanes.

The city began a pilot e-scooter program in August of 2019 with 25 scooters, but ramped up quickly to 50 stations and 250 scooters. Through a survey, Asbury Park has found that scooter use is replacing car trips. Some safety issues have spurred a decrease in e-scooter travel speed, age verification requirement before rental, and increased education efforts including the use of social media.

The speakers agreed that bike share and e-scooters have a place in their communities. They will continue to promote and expand the programs while addressing safety concerns and the need for infrastructure.

The presenters made several additional points in response to audience questions and comments.

E-Scooter Programs: Current State of Practice in US Cities 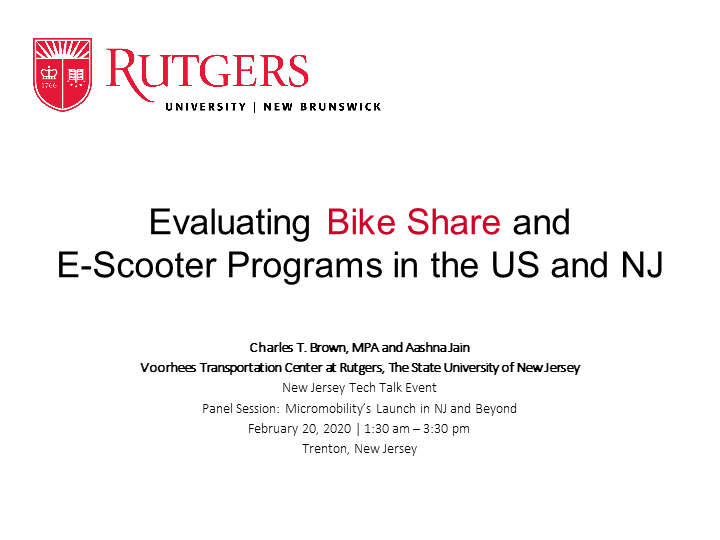 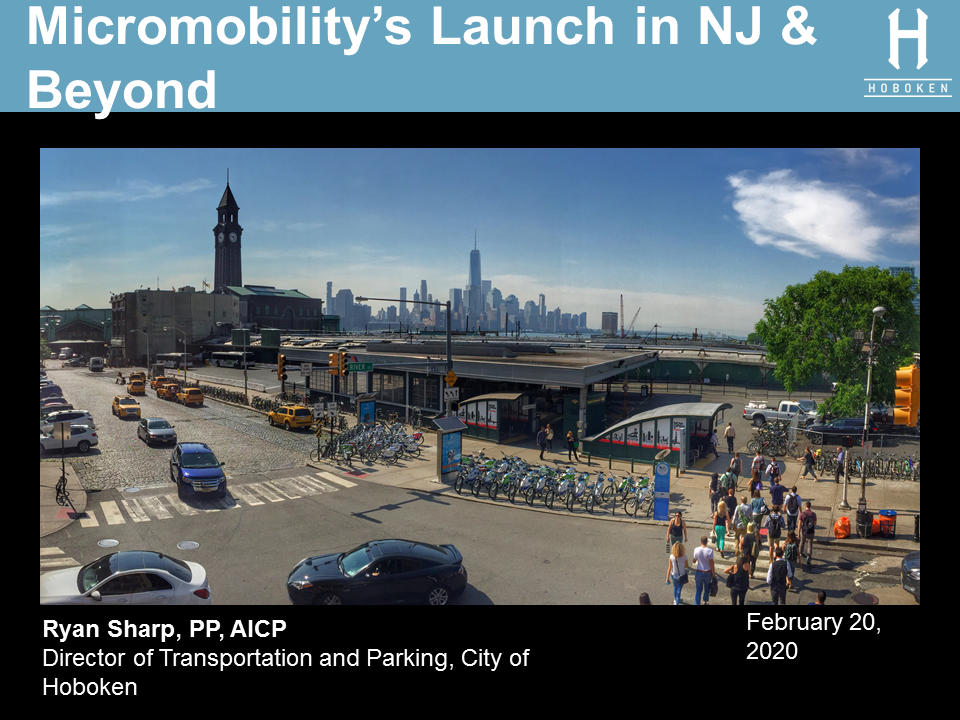