According to the National Highway Traffic Safety Administration, while 2018 featured a decline in overall fatalities on our roads, there was an increase of pedestrian fatalities, highlighting the increased need for action. Considering that over 72% of pedestrian fatalities occur at non-intersection locations, Mr. Eun focused much  of his presentation on cost-effective countermeasures that can be systemically applied to reduce these crashes and save lives.

In his talk, he described how roadway configuration, traffic volumes, and posted speed limits inform the selection of appropriate countermeasures. By way of example, he referred to the Crosswalk Markings section of the Manual on Uniform Traffic Control Devices (MUTCD Section 3B.18): 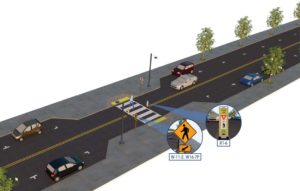 “new marked crosswalks alone, without other measures designed to reduce traffic speeds, shorten crossing distances, enhance driver awareness of the crossing, and/or provide active warning of pedestrian presence, should not be installed across uncontrolled roadways where the speed limit exceeds 40 mph and /or either has 4 or more lanes without a raised median or island and ADT of 12,000 or more, or 4 or more lanes with raised median island and ADT of 15,000 or more”.

Setting the foundation for countermeasures,  Mr. Eun cited grave statistics from research on how increasing speeds lead to greater serious injuries or fatalities for pedestrians and warned of a diminishing “cone of vision” at higher speeds as visual field and peripheral vision narrows. He shared a provocative safety video to convey how even small differences of speed can affect the ability of drivers to react and avoid crashes to the detriment of pedestrians.

Describing them as the “Spectacular Seven”, Mr. Eun highlighted the following countermeasures:

Using case examples from all over the country, Mr. Eun discussed several example situations where these countermeasures could be used, as well as the benefits to implementing them and the difficulties that may be encountered during implementation. Since expecting pedestrians to travel significantly out of their way to cross a roadway is unrealistic and counterproductive, improvements must be made to make crossings more accessible and more safe. By focusing on uncontrolled locations, agencies can address a significant national safety problem and improve quality of life for pedestrians of all ages and abilities. 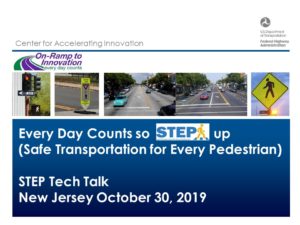 Mr. Eun then addressed a systemic approach to identifying safety issues and appropriate STEP countermeasures. Using this systemic approach, agencies can focus on countermeasures that address risk rather than specific locations. Once a risk factor characteristic of a number of crashes has been identified, agencies can be proactive and address that risk wherever it appears within the system. A system-based approach acknowledges crashes alone are not always sufficient to determine what countermeasures to implement, particularly on low-volume local and rural roadways where crash densities are lower, and in many urban areas where there are conflicts between vehicles and vulnerable road users (pedestrians, bicyclists, and motorcyclists). As such, systemic safety analysis does not require extensive data or complex analysis methods to be effective, just the desire to make the biggest safety impact with limited resources.

View the presentation: Eun Peter (2019). Every Day Counts so STEP up (Safe Transportation for Every Pedestrian).