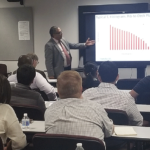 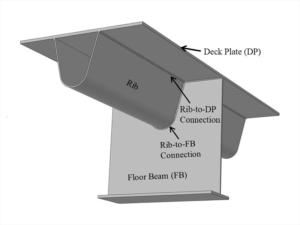 An orthotropic bridge deck is one in which a steel deck plate is supported by longitudinal ribs and transverse crossbeams. The ribs and crossbeams give the deck different stiffness in the transverse and longitudinal directions, allowing it to distribute weight effectively.

Dr. Roy first posited the advantages of using these bridge decks, emphasizing their light weight and structural efficiency, and their estimated life span of over 100 years. Orthotropic bridge decks are lighter due to the reduced need for concrete, which minimizes the total dead load carried by the rest of the structure. Estimates are that up to 25 percent of a bridge’s total mass can be saved by reducing the deck weight, and those weight reductions can extend to cables, towers, piers, and so forth. Orthotropic decks are prefabricated and their modular form allows for accelerated bridge construction and higher quality control. The bridges can be erected more quickly, thus minimizing the impact on New Jersey’s motorists. The maintenance requirements for orthotropic bridges are expected to be much lower as there would be no need to re-deck the bridges every few decades. While Dr. Roy acknowledged that there are high initial construction costs associated with orthotropic bridges due to the complex welds involved, such costs would be offset by the lower maintenance costs over the life of the bridge.

Dr. Roy suggested that the orthotropic bridge deck design could help address some of the state’s greatest transportation infrastructure needs related to bridge condition, maintenance, as well as overall traffic congestion. To demonstrate this, Dr. Roy used data from the Route 7 Wittpenn Bridge between Kearny and Jersey City, which is the first bridge constructed by NJDOT to use an orthotropic bridge deck. 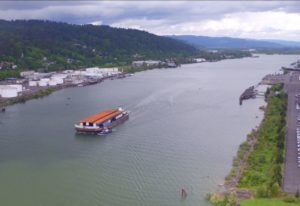 The 300-foot deck was shipped in one piece via the Panama Canal from Portland, Oregon and arrived at the Wittpenn Bridge in July, 2017. For an illustrated depiction of the Wittpenn Bridge deck’s trip to Kearny, see Oregon to New Jersey: The Journey of New Jersey Department of Transportation’s First Orthotropic Deck.

The current work on the bridge is proceeding quickly as the steelwork for the bridge is less impacted by cold weather than a typical concrete bridge deck would be. The new bridge will be twice as high as the current Wittpenn, and will feature wide lanes and shoulders. 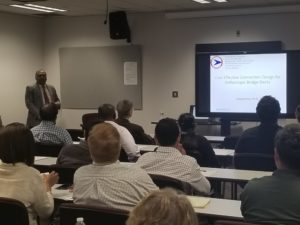 For related information, please view the report, Design and Fabrication of Orthotropic Deck Details. The objectives of the research were to verify the design and fabrication of the orthotropic deck details proposed for the lift bridge, for infinite fatigue life. Multi-level 3D finite element analyses (FEA) of the proposed deck were performed to determine the critical stresses at the connections, the corresponding load position, and the deck specimen. To develop cost-effective connection details, three variations of rib-to-floor beam and rib-to-deck plate connection details, including the influence of different fabrication parameters, were explored in full-scale, small-size mockups. Subsequently, the infinite life fatigue performance of the connection details were evaluated by laboratory testing of a full-scale prototype. The fatigue testing was conducted under simulated rear tandem axle loading of the American Association of State Highway and Transportation Officials (AASHTO) fatigue truck with adequate boundary condition. The prototype testing was runout after 8 million cycles, verifying the infinite life fatigue performance of the deck design.