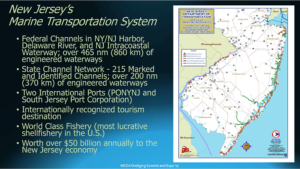 Mr. Douglas discussed the extent of New Jersey's Marine Transportation System, and its significance to the local, and larger economy.

Mr. Douglas described the New Jersey Marine Transportation System (MTS) that includes all infrastructure and equipment that connects land-based transportation assets to navigable water. The MTS supports a $50 billion industry that encompasses international and domestic freight, commercial fishing, recreational boating, travel and tourism, marine trades and ferries. NJDOT is directly responsible for maintaining some 200 of the 600 nautical miles of engineered waterways that provide safe navigation pathways to and from the shore-based infrastructure, and provides dredged material management services for another 150 nautical miles of Federal waterway. Since Superstorm Sandy, OMR is the State’s lead agency for these responsibilities, providing planning, design, procurement and construction services and coordinating the State’s waterway emergency response.

The system is divided into three regions: the New Jersey/New York Harbor (the third largest port in the country), the Delaware River, and the Atlantic Shore where NJDOT takes a larger role. Much of their work involves managing clean dredge materials in shallow draft areas where there is little land on which to place the dredged material. Mr. Douglas described the various aspects of the dredging process including bathymetric surveys, sediment sampling and analysis, and permitting, and went on to explain uses of dredged material.

As a natural part of the aquatic ecosystem, sediment is a resource. The Office of Maritime Resources works to reuse the material in various ways depending on the nature and composition of the sediment. Mr. Douglas offered several examples of reuse such as construction fill, beach replenishment, landfill capping, and brownfield redevelopment. The OMR is exploring the use of sediment to increase shoreline resiliency through marsh and dune restoration and other shoreline stabilization techniques, island creation, dredged hole replacement, and habitat creation. 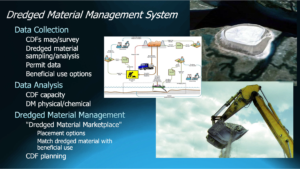 Mr. Douglas discussed his agency’s Maritime Asset Management tools developed to evaluate cost, conditions, and to help prioritize the Office’s work. Their Waterway Linear Segmentation database, comparable to the roadway Straight Line Diagrams, is a first in the nation for maritime asset management. OMR is assembling a dredged material database. Deployment of these tools is anticipated later this year. OMR’s Maritime Asset Management Systems comprises these two tools and produces plans based on current and future conditions, cost, and availability of dredge system management. The output is similar to the asset management reports used by highway and bridge engineers to assist management in decisionmaking.

Participants posed questions via the Q&A feature. Mr. Douglas was asked what quality controls are in place before dredged material is moved. He noted that New Jersey has one of the most stringent systems in place in the country. NJDEP has a list of contaminants related to locations. They test both the sediment before it is moved, and the water, and a mixture of sediment water. If the material is stabilized and placed upland, it is exposed to lab testing and leachate tests on site. Another participant asked if dredging stirs up contaminants. Mr. Douglas replied that it can, and that the rigorous testing is designed to address the possibility. He noted the distinction between navigation dredging to clear a channel and environmental dredging conducted to clean contaminants from a waterway.

In response to a question concerning locations of island creation, Mr. Douglas stated that a group led by the US Fish & Wildlife Service is looking into potentially creating islands in Barnegat Bay.

A participant asked if dredged material could be used in new embankments and walls that NJDOT is building throughout the state. Mr. Douglas responded that the biggest barrier is cost. Straight fill is less expensive and easier to schedule; timing of highway projects with maritime projects has been difficult.

A participant wondered how the required dredge depth is verified once it is completed? Dredge depth is determined before dredging begins. Generally, channel depth has been determined for the entire state. Usually the depth changes only if conditions change, such as would be required with the introduction of larger vessels needing access to ports.

In response to a question concerning work continuing during the COVID-19 outbreak, Mr. Douglas noted that work is continuing and inspectors are on site every day following appropriate and requisite protocols.

The presentation given by Mr. Douglas can be downloaded here.

A recording of the webinar is available here, (or see right).