The Federal Highway Administration (FHWA) defines ASCT as technologies that capture current traffic demand data to adjust traffic signal timing to optimize flow in coordinated traffic signal systems.  FHWA established ASCT as one of its Every Day Counts Round One initiatives in 2011-2012. New Jersey has implemented ASCT through the work of the Traffic Management Systems unit.

Assistant Commissioner Kingsland pointed out that commuters anticipate the time it will take for their typical commute routine and that reliability in travel time is important; people do not like fluctuation in the time it takes to get from A to B. When there is reliability of travel time, people’s expectations are met. ASCT effectively reduces congestion and fuel consumption, thus reducing complaints and frustration.

The ASCT system continuously learns based upon the traffic that is out there and will respond to changes in traffic patterns. Thus, the ability to adapt to unexpected changes in traffic conditions will produce improved mobility through a given area. Furthermore, as connected vehicles become more prominent, the system has the ability to gather information through Vehicle-to-Infrastructure communication and provide timely data of vehicle spacing and signal timing. 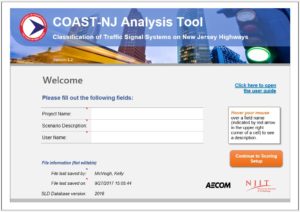 Assistant Commissioner Kingsland also provided some highlights about COAST- NJ, the management system developed by AECOM and the New Jersey Institute of Technology that is used to help decide where the ASCT systems will be placed. Using quantitative analysis, the tool ranks sections of corridors based on severity of congestion, variability of congestion, signal spacing, and traffic volume. COAST -NJ provides a classification system scoring process that encompasses 2,562 signalized intersections, 297 signalized arterial corridors, and 56 signal systems. It was officially released for use in March 2017.

During the Q&A portion of the Tech Talk, a member of the audience asked whether the system retains the collected traffic flow information to be able to look back to a certain date and time. The answer is that yes, it can. The issue, however, becomes length of records retention and where to store all of this information over the long-term.

Other agencies are also implementing ASCT. While not a NJDOT project, in the Meadowlands area there are 140 intersections tied into one ASCT system area managed by the Meadowlands Commission.

Mr. Kingsland was asked if rural areas with large distance between signals could possibly have cameras placed at intermediate sections between intersections. Kingsland replied that they certainly could, but the cost of such projects is prohibitive at this point in time.