On March 24, 2022, the NJDOT Bureau of Research hosted a Lunchtime Tech Talk! Webinar on “Goodluck Point Beneficial Use of Dredged Material via Nearshore Placement and Shark River Sediment Transport Model.” Welcoming remarks were given by Amanda Gendek, Manager of the Bureau of Research, who turned over the session to its moderator, Omid Sarmad, a member of the NJDOT Technology Transfer Project Team. 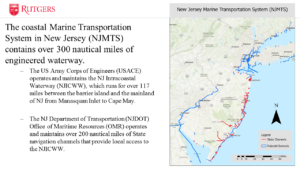 In his introductory remarks, Mr. Sarmad noted that nearshore placement of dredged sediment is a natural and nature-based features strategy that offers the dual benefits of providing ecosystem enhancement and reduction of coastal flooding while providing a viable, cost-effective long-term beneficial use option for disposal of dredge materials.  However, Mr. Sarmad noted that improper placement of dredged materials can damage habitat or wash away, providing little or no benefit. Strategic placement requires knowledge of site conditions and sediment transport behavior to provide ecosystem enhancement and resiliency.

Mr. Sarmad then introduced Dr.  Robert Miskewitz, Associate Research Professor within the Rutgers Department of Environmental Sciences and the Center for Advance Infrastructure and Transportation (Rutgers-CAIT), and Dr. Daniel Barone, Associate Research Professor within the Rutgers University Department of Marine and Coastal Sciences (DMCS), the Department of Geography and Rutgers-CAIT who, respectively, presented their research on the development of a Delft3D morphological model to improve estimation of channel shoaling along the Shark River waterway, and the lessons being learned from a nearshore sediment placement project at Goodluck Point in Berkeley Township, NJ. 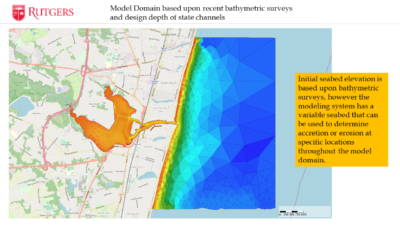 He outlined the challenge of maintaining a coastal maritime transportation system in NJ, a system of 300 nautical miles of state and federal channels, that continuously fills with sediment.  Dredging is required to keeps channels usable for marine ports and smaller recreational boating channels, which are all essential to New Jersey’s economy. However, maintaining navigable channels is expensive, meaning the amount that can be dredged is limited based on the existing fiscal resources despite the overall need for dredging based on the amount of sediment being accumulated each year.  Recognizing that sediment deposition rates are not uniform among areas, tools are needed for the informed setting of priorities for the allocation of resources. 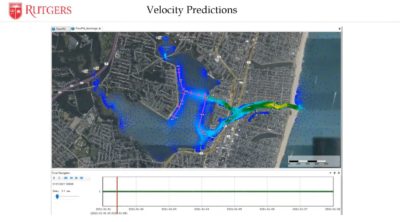 Dr. Miskewitz shared a visual simulation of how flow rates vary by locations and depth in the model.

Their research seeks to inform and supplement the multiple systems offered by NJDOT’s Office of Maritime Resources (OMR) – the Dredged Material Management System (DMMS), Waterway Linear Referencing System (WLS), and Maritime Asset Management System (MAMS) – that are being used to assess the state of the marine transportation system, what is required to get it to a “state of good repair”, and then keep it in a “state of good repair”. Then, as part of the dredging process, the questions turn to what to do with the dredge materials – how best to dispose of them or reuse them to put to a beneficial use.

Dr. Miskewitz explained that historically the estimation of sediment shoaling in the NJMTS has been accomplished via a highly simplified empirical sedimentation model. Dr. Miskewitz explained that channel depths are measured every few years, with data predicting infill rates and shoaling based on simple equilibrium depths between two points. In contrast, Dr. Miskewitz described their efforts to develop a more complex process-based hydrodynamic model, offered by the Delft3D model, which allows for more detailed prediction of sediment transport up to 2 years out. 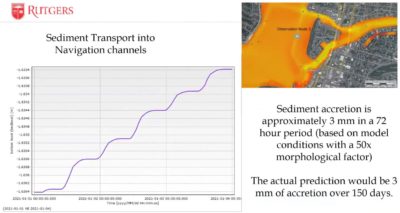 Dr. Miskewitz explained his estimates of the rate of sediment accretion over time.

To pilot this process-based hydrodynamic model, Shark River’s small network of maintained state channels was selected as ideal for small-scale testing. Sediment can vary by grain size and source, behaving differently based on these factors. This is crucial for modeling, as the muddy sediment in the Shark River does not move discretely like grains of sand. Rather, it breaks in chunks after a critical shear force is met, allowing currents to flow into the holes created, further undermining its cohesion.

The Delft 3D model allows for multiple parameters to be set, including bulk settling velocities for certain sediment types, measured from samples which had been collected.   The model that has been developed includes a fine fraction (silts and clays) and a coarse fraction (sand). Samples were analyzed to determine the fine content versus the coarse content and to inform the model’s characterization of the erodible layer.

The modeling process itself is very resource-intensive and, thus far, has only been run for a limited 3-day period, but allowed for extrapolation to estimate sediment accretion over time. The predictive model showed that shoals near channels are being destabilized, despite small changes in overall sediment levels. Dr. Miskewitz pointed to a ridge of shoal pushing outward and away from the channel, explaining that this means sediment is being suspended and other channels are shallowing. 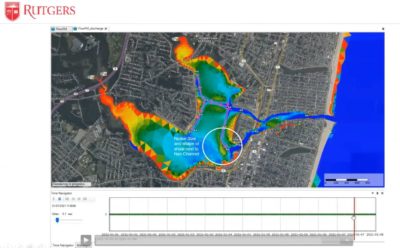 Dr. Miskewitz shared examples of the model’s visualizations of accretion and changes in shoals over time.

Ultimately, the long-term goal is to develop the capacity to run the model in real-time for the entire NJ Maritime Transportation System and incorporate the model into NJDOT’s OMR’s MAM model to better manage the sediment transport predictions and better manage the resources for dredging.  He noted their current plans to integrate new computer server capacity to perform the requisite sediment transport modelng in a timely fashion and at the scale envisioned for aligning with these goals.

Dr. Barone’s presentation, Goodluck Point Monitoring and Modeling Nearshore Placement of Dredged Materials, described ongoing research of a nearshore placement project in Berkeley Township. Owned by the Forsythe National Wildlife Refuge, the subject lands are a narrow sandy estuarine beach and dune system fronting a tidal marsh. His research involved a pre-dredging assessment of marine conditions (e.g., turbidity, current, wave conditions, etc.) and tracked the extents of sediment plumes from the filling operation. Then he assessed conditions at 3, 6, and 12 months after placement to see how beach morphology was affected, with an 18-month post-placement survey forthcoming. 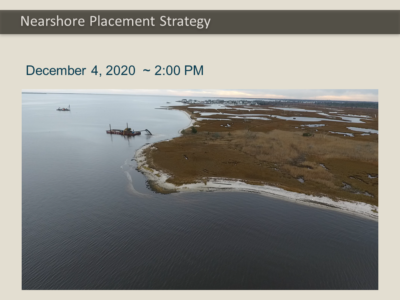 Dr. Barone shared several images and video captured by UAS, including of a barge used in pumping dredged materials.

Dr. Barone gave an overview of the several data collection methods used for monitoring and modeling the results of the beneficial use project before, during and after dredging.  He shared video taken by an unmanned aerial system (UAS) of a barge pumping roughly 6000 cubic yards of suitable dredged material (more than 70 percent sand) in a 1700ft linear bar near the shore.

Preliminary results showed that turbidity was relatively high, but not significantly higher during the project. (Ironically, turbidity was far higher prior to the project starting due to a storm event, then falling much lower just before the project commenced.) 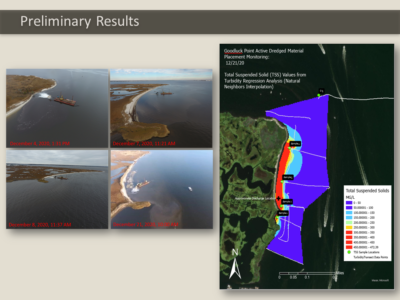 Dr. Barone illustrated how UAS aerial surveys were able to display visible plumes before, during and after dredging.

Dr. Barone shared images of the visible plumes, which were largely confined to the placement area. A major storm event occurred during the first month post-placement, moving most settlement onshore and into the southern area, where there is a small cape. After 12 months, only 42 percent of the placed sediment remained in the placement zone at Goodluck Point, with dominant alongshore sediment transported to the south.

Across the entire mapped project area (including beach, berm and offshore), a total volume loss of 7,100 cubic yards was observed between the Before-Dredge survey and 12 months post-fill. Similar losses across the entire mapped areas were observed between Before-Dredge and After Dredge.  Seaward shoreline movement – that is, accretion, occurred in the southern 715 feet of the project area over the survey period.

In future projects, he suggested consideration of alternative placements, such as feeder beaches. By experimenting with placement and validating against the hydrodynamic morphological model, he hopes that the better modeled flows will inform and improve placement strategies. 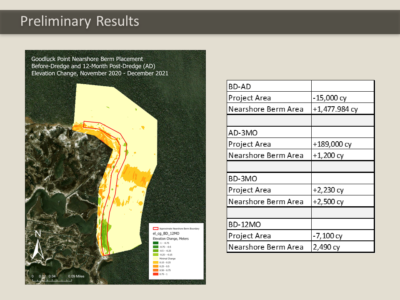 Q. Did freezing the cores of sediment samples impact the shear measurements?

Dr. Miskewitz: That they may have. We froze them because we had to wait months before students were available to process and we did not want anything to grow, as these samples are pretty much alive.

Q. Regarding the bridge at Highland Avenue: Does the model measure the changes in elevation and speed?

Dr. Barone:  This is a depth average model, not a 3D model.

Q. How well can you simulate Hurricane Sandy?

Dr. Miskewitz: That type of simulation will be done based on adjusting boundary conditions. Some affect from wind, but probably not as much as water level going up. The release of everything being inundated and then washed out, carrying stuff with it, is the dominant factor in erosion. 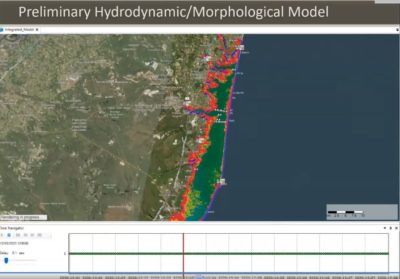 Dr. Barone shared several visualizations and explained how the hydrodynamic /morphological model can be used to optimize locations, configurations, and timing of dredge materials placement.

Q. Does the popularity of the channel affect the frequency or priority of dredging? (e.g., compared to residential areas)

Dr. Miskewitz: That is a question best directed to NJDOT’s OMR, not for us, but it is based on many things that would drive decisionmaking at which I’m not qualified to comment.

Q. Was the project permitted as a pilot project, or did it not have that designation?

Q. How do you test the accuracy of your preliminary model?

Dr. Barone: We compared our survey data with model output such as time-varying bed levels, but also ADCP (Acoustic Doppler Current Profiler) data, so we can validate velocity and water level and tide gauge.

Q. Were there any other locations identified as potential areas for similar observation?

Dr. Barone: The plan is to do this for the entire state’s navigation channels. Regarding Goodluck Point specifically, marshes are not getting bigger and beaches continually need sediment since there is an absence of sediment supply, so there are lots of places that will need this kind of work.

Dr. Miskewitz: We have a couple of projects in the area and further south that will get similar treatment.

The presentations described several technical analytical considerations in handling data and defining modeling parameters and contained several visual simulations that can best be appreciated by viewing the webinar recording, which is available here, (or see right).