Traditional fuel usage is expected to plummet as the country transitions to zero-emission vehicles (ZEVs).  State and Federal gas taxes, traditionally the predominant source of transportation infrastructure funding, will no longer suffice with this vehicular fleet transition.  In New Jersey, for example, the state’s plans for carbon-neutrality by 2050, will eliminate the roughly $2 billion generated from gas taxes each year—funds that are needed to keep our roadways in a state of good repair. One solution, proposed by the Eastern Transportation Coalition, is a mileage-based user fee (MBUF), which generates revenue by miles traveled, instead of gallons of fuel purchased. An MBUF could ensure that electric vehicle (EV) users pay their fair share for the upkeep of New Jersey’s roads.

To solve this looming funding gap, a consortium of states along the Atlantic seaboard, collectively known as the Eastern Transportation Coalition, are working to engage with the public on, and study the possibility of, implementing a Mileage Based User Fee (MBUF).  The organization is currently piloting multiple programs for both freight and passenger vehicles, including a study involving New Jersey drivers that concluded in late 2020. 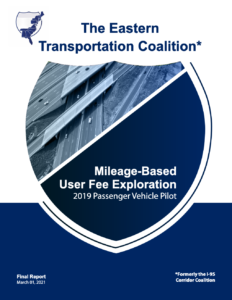 In March, 2021, the Coalition published a detailed report containing findings from a 2019 Passenger Vehicle Pilot in Delaware and Pennsylvania. The study was funded by a grant from the United States Department of Transportation’s Surface Transportation System Funding Alternatives (SFSTA) program. While the pilot was based in Delaware and Pennsylvania, the 889 participants represented fourteen member states, including New Jersey, and the District of Columbia.

The organization gave participants an option for how their miles would be tracked. Using a device provided by a vendor, Azuga, they had the choice of a sensor with geo-positioning functions, or one without, which would use a predefined estimate to determine mileage allocation. Location services for such a tracker are essential for the East Coast region, where interstate travel is more frequent. Out of the 3.13 million miles pilot program participants drove, 13 percent of miles were outside of their home state.

Both devices included “value-added” features, which collect data on vehicle health, driver performance, trip logs, and battery performance. At the end of the study, a majority of respondents indicated that they appreciated these features.

To estimate charges, the Coalition created a miles-traveled tax rate for each state, multiplying the state and federal gas tax average by monthly mileage, with an additional 20 percent rate multiplier to cover projected administrative costs. For example, a New Jersey driver with an average fuel economy vehicle driving 1,000 miles per month would pay $87.64 under the MBUF—or about a cent more than they currently pay in state and federal gas taxes. However, under the program, a driver with a hybrid car, such as a Toyota Prius, would be required to pay an additional $10.43. For an EV driver, who currently avoids paying the gas tax entirely, the MBUF program would obligate them to pay $18.69 a month toward road maintenance for the same distance. (See figure below). The organization provides a mileage calculator for members of the public to explore how much they would pay under the proposed system. 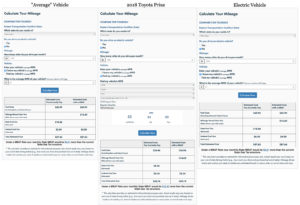 From left to right, an average vehicle, hybrid vehicle, and electric vehicle and their respective MBUF costs. Courtesy The Eastern Transportation Coalition

During the pilot program, the Coalition conducted surveys before and after, and held focus groups with participants, to gauge changes in perception. One survey found that 70 percent of New Jersey respondents thought that transportation funding is growing or the same, despite falling gas tax revenues. By the end of the test period, 85 percent of participants said that the MBUF device was helpful and easy to use, and concerns about privacy dropped by nearly half.

From 2018-2019, the organization conducted a study with freight vehicles, forming a Motor Carrier Working Group (MCWG) with industry partners. The pilot included 55 tractor-trailers that traveled a total of 1.43 million miles over the six-month period. The overall conclusion was that trucks themselves are varied, and, as a class, entirely dissimilar to cars. Trucks typically include trackers as part of the International Fuel Tax Agreement (IFTA), a tax redistribution system, and the International Registration Plan (IRP), which calculates registration fees according to fleet distance through various jurisdictions. However, such a system would be incompatible with MBUF because it lacks revenue collection tools, location services, and consistent implementation. This study found that the MBUF must be adjusted to the type of vehicle and service it provides, or else it unintentionally privileges certain carriers. To further gauge the intricacies of MBUF for commercial trucking, the Coalition began another freight truck pilot in the fall of 2020 with 200 vehicles. 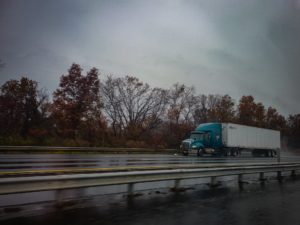 The Coalition's studies have demonstrated that MBUF for freight must be tailored to type and service. Joseph Paul | Unsplash

Dr. Patricia Hendren, Executive Director of the Eastern Transportation Coalition, shared these findings with the Senate Committee on Environment and Public Works in April, 2021. Dr. Hendren stressed that a federally-led, national education campaign about dwindling transportation funding was necessary, to boost public awareness about this growing concern. In addition, the executive director advocated for further studies at state and regional levels of both passenger and commercial vehicles, to ensure that that such a transition will be equitable, efficient, and have strong public support.

It is certain that a switch from the traditional gas tax funding system is necessary to maintain America’s road infrastructure, and mileage-based user fees are a promising mechanism for doing so—one way to ensure that everyone pays their fair share.