What inspired the bicycle-friendly resurfacing program? What were the considerations when you started this approach?

Going back to where things really started would be with Matt Lawson, the Principal Planner-Transportation for Mercer County, who came to the county in 2005-6, and encouraged the engineering and planning divisions, our regional partners and municipalities, to improve the road network for bicycle use. He helped inspire our bicycle planning efforts and helped move them forward. Along with him, several people working at the County were outdoor enthusiasts who enjoyed hiking and bicycling and wanted other County residents to be able to use the roads and trails in a safe manner. Our County Administration as well as our new County Engineer, George Fallat also placed a larger emphasis on road safety which included bicycles and pedestrians.

In 2009, the Mercer County Bike-Pedestrian Task Force (MCBPTF) was created with the support of Mercer County Executive, Brian M. Hughes, and hosted by the Greater Mercer Transportation Management Association (GMTMA). The MCBPTF consists of municipal representatives designated by town mayors as well as various advocates and residents. The primary purpose of the organization is to help advocate for non-motorized infrastructure throughout Mercer County, including sidewalk improvements, bicycle improvements, intersection improvements, trail improvements, and many others. The group also acts as a forum to coordinate municipal efforts and keep each other informed of activities happening around the County. 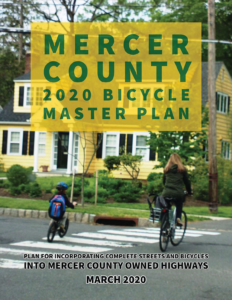 When I came to the County in 2017, I took on the projects Matt had been working on and the bike plan was one of the first things I was tasked with advancing. The County had already passed a Complete Streets policy in 2012 to promote safe access and mobility for all users of all transportation modes and since that time, every municipality in Mercer County has adopted their own Complete Streets policy. With a consistent policy across all jurisdictional levels, we knew that Mercer County had a common goal of advancing these types of projects.

Work began on the Bicycle Master Plan in 2017 with the goal of creating a continuous network of bicycle facilities on County-owned roads. At first, we were looking at establishing just a couple of routes, but we realized that the process that we were using could be applied to any number of routes. We took a comprehensive look at the entire 180 centerline miles of the county road network in 50- to 400-foot intervals, and particularly more highly traveled routes which were perfect candidates to incorporate bike lanes to create meaningful connections.

During our planning efforts, we had found out that one of the routes we were looking at was actually going to be repaved and our County Engineer allowed us to advance a concept we developed in-house. As a result of that project and experience, we have shifted to our resurfacing program as the main implementation method for building out our bicycle lane network. This bicycle friendly resurfacing program helps us implement the Complete Streets policy and Bicycle Plan.

We used the Federal Highway Administration’s (FHWA) guidance document Incorporating On-Road Bicycle Networks into Resurfacing Projects to support the effort, and in particular, the argument for cost savings. This piecemeal method of incorporating bike lanes significantly reduces cost of each project and we believe that you have to start somewhere so that years down the line you have a connected network of routes. This was the same problem back in the day when planning boards began requiring sidewalks for developments that were in the middle of nowhere but over years as neighboring properties developed, they created a connected sidewalk network.

What factors did you consider when you identified roads for bicycle improvements?

Factors for analysis of our County Routes is described in great detail in the Mercer County Bicycle Master Plan.  We looked at cartway width, environmental constraints, crashes records involving bicycles, network connectivity, Level of Traffic Stress (LTS), Annual Average Daily Traffic, truck volumes, existing bus routes, existing and proposed speed limits, bicycle travel demand modeling and 8-80 Design. The idea behind 8-80 design is that if you design a project for an 8- year-old and an 80–year-old, it should work for nearly every person.

To anticipate the cost for implementation, we created a linear foot calculator in MS-Excel that looks at the type of facility and is assigned a code based on the amount of work needed to create an improvement. That code is based on both our striping contract in 2019 as well as general construction costs we tried to localize to New Jersey. When the code is multiplied against a linear foot number, we get a fairly accurate general cost estimate. 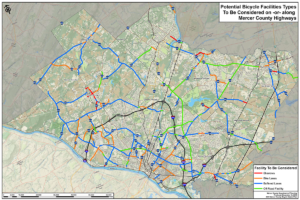 To create our Excel table and map of the bicycle route analysis, we used a combination of GIS, Google Earth, field visits and Nearmap to define the cartway width, speed limit, pinch points, pedestrian activity, bus routes, and other factors with the goal of recommending a facility for every county road. Now, the plan does not commit the County to a particular projects or final recommendations because priorities and conditions can change. Our plan specifically mentioned that the map shows “Facilities to Be Considered” at the time when we draft concepts for advancement.

What projects have you implemented so far?

The 2019 Pilot Bicycle Paving Program included the implementation of almost seven miles of new bicycle lanes and we learned a lot that year on internal process and coordination with our towns. Our first real project was Scotch Road in Ewing Township which included a road diet with a 4-lane to 2-lane with center turn lane conversion. That project included buffered bike lanes and will eventually connect to a larger 17-mile “Greater Western Bikeway” project to the north and to the proposed bike lanes and extension of Silvia Street by Ewing Township to the south.

Since that time, we also implemented bicycle lanes on Elm Road in Princeton, N Main Street in Hightstown, Ewingville Road in Ewing, Prospect Street in Ewing and East State Street in Hamilton. We’ve also marked out sharrows in a few other locations. At this point, we essentially work with our Highway Department to receive the year’s repaving program and see where we can work to implement projects. Since we will need to have a crew out there to restripe, we look at those projects to determine what our year’s priorities will be. 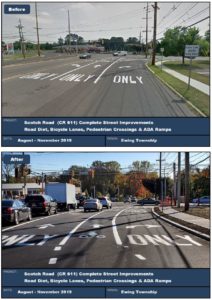 In 2019, the Delaware Valley Regional Planning Commission (DVRPC), the Metropolitan Planning Organization for our region, provided traffic engineering and bike facility planning assistance to help determine the feasibility of bicycle improvements on a segment of County Road 636 which is the main corridor between urban Trenton and suburban Ewing and The College of New Jersey. DVRPC assisted with the segment, between Rt.31 and Olden Avenue, which involved looking at two intersection redesigns.

Will the County take on more projects that are more than just restriping?

The plan includes a variety of routes, some of which require simple striping and others that will require more intensive work such as road widening or intersection redesign that may involve drainage or right-of-way issues for example. We prioritize the roadways that are in need of repaving, and only need additions of epoxy paint or thermoplastic and signage to define the bicycle facility. We continue to plan for more complicated segments and work with our on-call engineering contractors as well as with our in-house staff. In the future, we will likely apply for federal funding for more significant and more complicated projects.

How are your typical projects funded?

Projects are primarily funded through the County’s capital budget. The County has applied for federal grants for projects as well. In 2018, we received a $2.3 million Transportation Alternatives Program (TAP) grant for the Great Western Bikeway, a 17.5 mile route in the northwest part of the county that primarily will follow County Road 546 and run between Delaware and Raritan Canal towpath trails at Rt. 29 and Rt. 1.

Do you work with any municipalities on bicycle infrastructure on municipal roads?

We have assisted a few townships, either with general planning assistance or in design but all municipalities are not ready to take on this approach. We try to reach out to towns about coordinating efforts and we have a close working relationship with several towns. In those situations, we feel that we can build out a complete and connected network relatively easily. Other towns tend to be more closed off to and stick to home rule more than others. Despite that, we can still create a high level of connectivity throughout the County by establishing bicycle infrastructure on County roads which already serve as main connections between our municipalities and adjacent Counties. 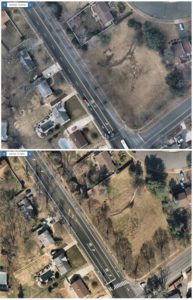 Are you aware of other counties working on bicycle-friendly resurfacing?

I am not aware of other counties using this approach, or not to the extent that Mercer County is. It seems like Camden and Burlington Counties are not doing as much work with on-road bicycle networks, but are putting a lot of good work into establishing off-road trail networks and multi-use paths. Mercer County is one of eight NJ counties that have a Complete Streets policy, and the policy has really guided the Bicycle Master Plan. The success of the program is in part due to the support of both the Mercer Board of County Commissioners and the local pedestrian and bicycle advocate community.

Do you anticipate that Mercer County will be able to continue this program?

Yes, we will continue to work with the Bicycle Master Plan and coordinate on the paving list from our highway department. We’ll continue to select road segments for each year’s projects, conduct an on-site evaluation for each, and make recommendations to the County Engineer. We plan for 8 or so new repaving projects this year and generally have had 2-5 projects in an average paving season. For our larger projects, we will continue to go after state and federal funding which will help us with larger improvements that go beyond repaving.