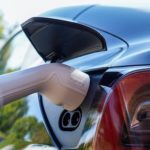 In February of 2021, Governor Phil Murphy announced a historic $100 million investment in clean energy transportation vehicles and infrastructure, building on work laid out in the 2020 Energy Master Plan, which calls for a transition to 100 percent clean energy by 2050. In 2019, the State emitted 97 million metric tons (MMT) of carbon dioxide (CO2); with the implementation of the Energy Master Plan, annual emissions are projected to be dramatically reduced to 24.1 MMT of CO2. Several NJ State agencies are working to lay the foundation for this monumental transition. The $100 million commitment is only one aspect of a much larger, inter-agency undertaking.

The Energy Master Plan provided a blueprint for New Jersey’s greenhouse gas reduction goals, and the 2020 New Jersey Senate Bill 2252 (S2252), commonly referred to as the electric vehicle law, is the legislative impetus for such work. The New Jersey Department of Environmental Protection (NJDEP), the New Jersey Economic Development Agency (NJEDA), the New Jersey Department of Transportation (NJDOT), and NJ TRANSIT, among others, are now collaborating to achieve the transformation of the transportation sector, responsible for the largest share of the State’s net greenhouse gas emissions, to 100 percent carbon neutral.

The clean energy initiative is funded, in part, through a legal settlement negotiated between Volkswagen and the United States Environmental Protection Agency (USEPA) and the California Air Resources Board (CARB), after a court determined that the automaker had installed defeat devices that hid emissions of nitrogen (NOx) in certain vehicles models. From the resulting $3 billion settlement, New Jersey was allocated $72.2 million, which is now being administered by NJDEP for clean energy transportation projects.

Without sufficient charging infrastructure, the envisioned shift to EVs will prove impossible to achieve. One oft-cited reason hindering EV adoption is “range anxiety,” a fear of not being able to refuel for lack of nearby facilities. Currently, 95 percent of state residents live within 25 minutes of a DC Fast Charger, a distance that will only decrease as new chargers are built. Stations throughout the State can be located using NJDEP’s Public Electric Vehicle Charging Locator.

For Phase 1 of the Volkswagen Mitigation Fund disbursal, NJDEP allocated $3.2 million to pay for public fast chargers. In 2019, through the It Pay$ to Plug In program, VW funds have financed 827 new charging outlets, ranging from the City of Cape May, to Rutgers—New Brunswick, to the Village of Ridgewood.

An important source of revenue for supporting Governor Murphy’s $100 million pledge is the Regional Greenhouse Gas Initiative (RGGI). RGGI is a multistate partnership that has set a regional cap on carbon dioxide emissions. Fossil-fueled power plants exceeding the limit must purchase extra capacity at an RGGI auction. In the first quarter of 2021, New Jersey received $27.1 million that will be invested to fight climate change according to a Strategic Funding Plan. The New Jersey RGGI Climate Investments Dashboard provides up-to-date, visual reports of progress on RGGI grants across the State. The initiative has awarded $22.2 million thus far to several municipalities, including for the purchase of two electric garbage trucks for the City of Trenton, and two electric shuttle buses for West New York.

The RGGI purchases coincide with Phase 2 of NJDEP’s Volkswagen settlement disbursal, announced in February, 2021. A further $31.7 million of funding for ZEVs from the settlement will be distributed across the state. As Passaic County receives RGGI funds for an electric shuttle bus, the City of Paterson has been allocated VW money for two electric garbage trucks. With VW funds and RGII auction proceeds, the City of Elizabeth School District purchased seven electric schoolbuses. Gradually, municipalities and companies across the state are beginning to grow their ZEV fleets.

To complement these 2021 ZEV additions, NJDEP has proposed spending an additional $5.4 million of Volkswagen funds for charging grants. For example, the agency selected an ACME grocery store in Woodbury, a Shell station in Wayne, and a hotel in Fort Lee, among others, for DC Fast Charger grants. The DC Chargers are being prioritized in this round because of their high efficiency: a twenty-minute charge can add 60 or 80 miles of driving range.

In July, 2020, New Jersey and fourteen other states and the District of Columbia signed a Memorandum of Understanding (MOU) committing to collaborate on policies to convert medium and heavy-duty vehicle fleets, such as school buses and freight trucks, into ZEVS The MOU sets a goal of 30 percent electric share heavy and medium-duty vehicles sold in 2030, with a 100 percent share by 2050. The regional approach reflects an acknowledgement that transportation emissions are an interstate issue, and that interstate collaboration is necessary to meet such goals.

To begin instituting this shift, NJDEP has started the rulemaking process for N.J.A.C. 7:27-31 and 33, two proposed regulations that would institute a credit/deficit program for manufacturers of trucks of over 8,500 pounds. Beginning in 2025, sellers of medium and heavy-duty vehicles would be required to generate or purchase credits to offset deficits from the sale of greenhouse gas-emitting vehicles. This offset could be accomplished by increasing sales of ZEVs, or by purchasing credits from another manufacturer. Deficits would increase every year through 2035, resulting in an increase in the number of commercial ZEVs sold in the state. This is modeled after the Advanced Clean Trucks (ACT) rule that California implemented in 2019.

For public transit, bus fleets must be converted as well. The state’s EV law, S2252, requires that NJ TRANSIT transition its new bus procurements to all-electric. New bus purchases must be 50 percent electric by the end of 2026, and 100 percent zero-emissions by the end of 2032. NJ TRANSIT, which received funds for eight new electric buses in Camden from VW Phase 1, will start testing these vehicles in service in the fall of 2021. One issue affecting the conversion is range; on certain routes, particularly in South Jersey, the required driving distance exceeds single charging capacity. NJ TRANSIT is currently exploring solutions such as building new chargers and making changes to operating routes.

Though $100 million is a significant investment, more resources will be needed to promote the transition from carbon-emitting vehicles. Further investment, as well as interagency and regional cooperation will be crucial to meet the Energy Master Plan’s goal of 330,000 ZEVs on New Jersey Roads by 2025.

NJDOT is working to support the efforts of agency partners to achieve the goals set out by the Energy Master Plan and mandated by the electric vehicle law. NJDOT has continued to invest in alternative mobility, increasing traffic efficiency, and the conversion of its fleet to ZEVs.  In a recent NJDOT newsletter, the Commissioner Diane Gutierrez-Scaccetti noted that the agency has worked with a team from Princeton University to determine an electric charging infrastructure implementation plan, the first step of which will be installation of equipment at the Ewing, New Jersey headquarters.

This infrastructure will be important not just for NJDOT but for the statewide fleet, which, as it transitions to ZEVs, needs centralized charging infrastructure. By law, the statewide fleet must be 25 percent electric by 2025, and 100 percent electric in 2035. NJDOT has already ordered 49 hybrid vehicles, progressing toward the department goal of 88 alternative fuel vehicles in service in the next three years.

Success will require not only committed public policy, but overwhelming public support to make use of the budding charging network, expanded subsidies, and soon-to-be converted fleets.

Higgs, L. (2021, May 26). NJ Transit Unveils Electric Bus Plan, But it Has to Compensate For Low Battery Range. https://www.nj.com/news/2021/05/nj-transit-unveils-electric-bus-plan-but-it-has-to-compensate-for-low-battery-range.html

NJDOT (2021, April). How NJDOT is Working Toward a Cleaner New Jersey. https://www.nj.gov/transportation/about/townhall/doc/ctcnews_vol21.pdf