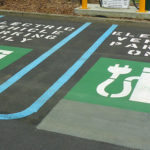 In January 2020, the State of NJ’s Energy Master Plan (EMP) was released which communicates the state’s aim to achieve 100 percent clean energy, defined as “carbon-neutral electricity generation,” by 2050. The plan provides a roadmap of seven key strategies to achieve this goal across a range of state agencies that include the New Jersey Board of Public Utilities (NJBPU), the Department of Environmental Protection (NJDEP), the Department of Transportation (NJDOT), the Department of Community Affairs (NJDCA), the Department of Labor and Workforce Development (NJDOL), the Economic Development Authority (NJEDA), and NJ TRANSIT. The EMP focuses heavily on the transportation sector as it is the state’s largest source of net greenhouse gas (GHG) emissions at 42 percent. 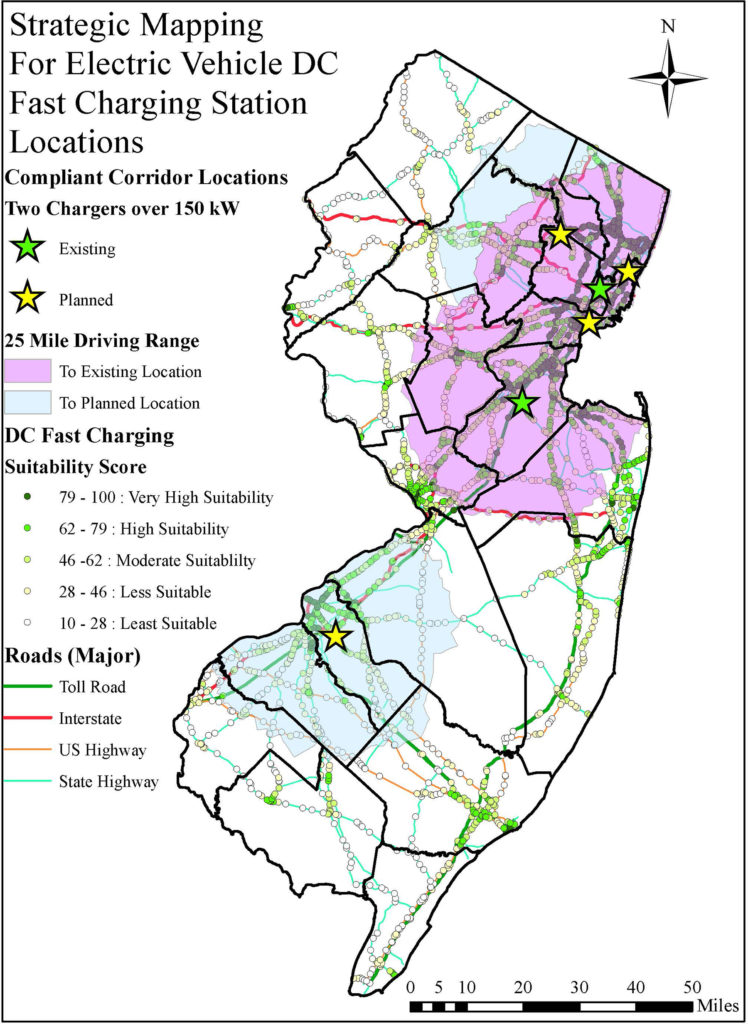 As the state works to reduce emissions from the transportation sector, the Volkswagen Mitigation Trust has provided a key source of early funding. In fall 2015, the United States Environmental Protection Agency (USEPA) and the California Air Resources Board (CARB) alleged that Volkswagen had secretly installed defeat devices in select Volkswagen, Audi, and Porsche-branded turbocharged direct injection diesel vehicles. The default devices had software that was specifically designed to cheat federal and state regulator emission tests. This resulted in vehicles with the devices emitting pollutant oxides of nitrogen (NOx) at up to 40 times the limit set by USEPA. NOx contributes to the materialization of ground level ozone which in turn causes harm to the respiratory system and cardiovascular health. Following this allegation, two Partial Consent Decrees were approved by the United States, California, and the defendants which formed an Environmental Mitigation Trust that provided funds to the 50 states, Washington D.C., Puerto Rico, and federally recognized tribes to counteract the negative impacts of the excess NOx emissions. Of the approximately $3 billion settlement, New Jersey was allocated $72.2 million, based on a calculation of the number of affected vehicles in the state, according to the state’s Beneficiary Mitigation Plan.

The Beneficiary Mitigation Plan states that 80 percent of the funds must be spent by October 2027, ten years after the Trust Effective Date, with five additional years for the remaining 20 percent if necessary. The settlement agreement outlines nine categories of eligible projects, which can be found here on NJDEP’s FAQ page. Additionally, the settlement allows for up to 15 percent of the funding to be used for light duty zero emission vehicle fueling and charging infrastructure. In support of the state’s target to achieve 100 percent clean energy by 2050, New Jersey’s goals for the mitigation funds are to reduce NOx, benefit communities disproportionately impacted by emissions, and support the expansion of zero emission vehicle adoption across the state. Additionally, NJDEP has a strong interest in pilot projects that help increase access to electric transportation modes such as bus transit or ride share in disproportionately impacted communities.

NJDEP is the lead agency assigned to prepare the state’s Mitigation Plan and authorize funds for approved projects with assistance from NJDOT, NJBPU, and NJ TRANSIT. According to Peg Hanna, Assistant Director of Air Monitoring and Mobile Sources at NJDEP and the lead for the Volkswagen Mitigation Trust at the agency, most states have appointed their environmental agency as the lead, with a few appointing their energy agency or governor’s office instead. Additionally, partner organizations outside the government include electric vehicle (EV) charging/fueling infrastructure providers, EV manufacturers, trade associations, and Environmental Justice (EJ) organizations.

Environmental Justice is a core component of the state’s goals in distributing the mitigation trust funds. Ms. Hanna explained that the primary way NJDEP has engaged with stakeholders in the EJ community is the agency’s EJ Advisory Council, using their meetings and subgroups to inform and seek feedback on the Volkswagen Mitigation Trust.

Currently, EJ communities are identified at the agency using several criteria, including whether it is an urban area, if it is a low- or moderate-income community, and whether it has been disproportionately impacted by air pollution. She mentioned this approach could change in the near-future with current state legislation S232, which would require NJDEP to evaluate environmental and public health impacts when reviewing permits for certain projects in overburdened communities. The bill provides a precise definition of an overburdened community which includes: 35 percent of the households qualify as low-income according to the U.S. Census, 40 percent of households are minority, or 40 percent of households have limited English proficiency. This definition is expected to be helpful moving forward to provide a clear map and list of municipalities that meet these criteria. 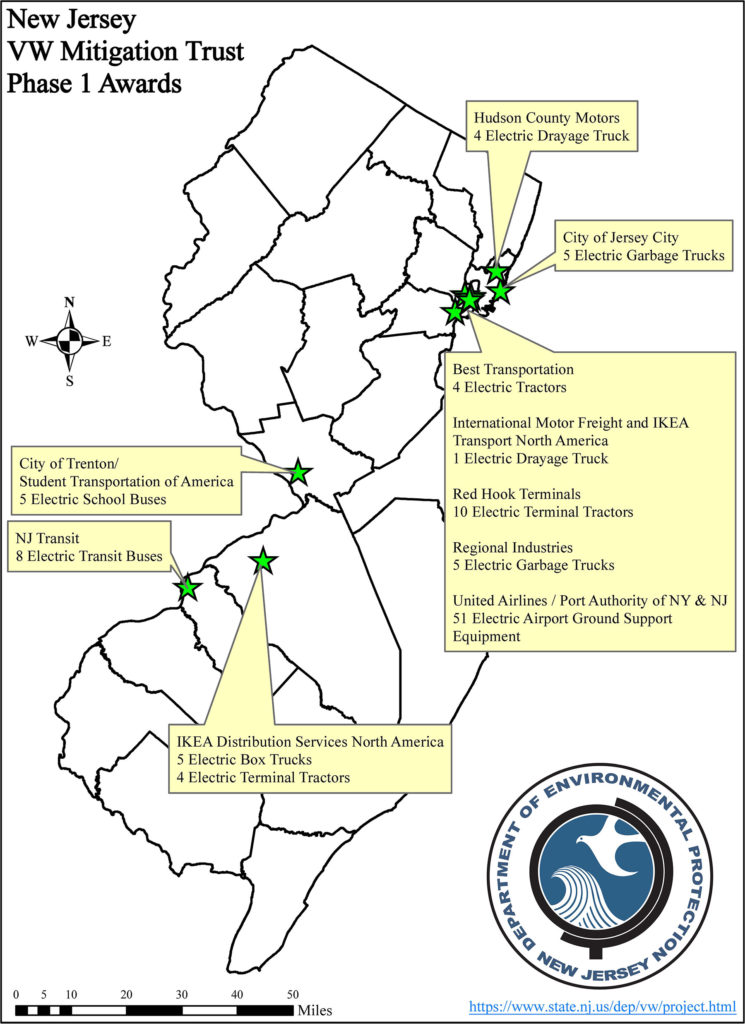 So far, NJDEP has allocated Volkswagen Mitigation Trust funding through two rounds in 2019, for a total of $27.2 million. In February 2019, the agency announced that $8 million would be used to purchase 8 new electric NJ Transit buses for the City of Camden and $3.2 million in grants were awarded for roughly 827 charging outlets at 533 charging stations across the state, which more than doubles the number of non-residential charging outlets across New Jersey.

The funding to expand chargers is distributed under NJDEP’s It Pay$ to Plug In grant program which aims to expand the state’s network of electric vehicle infrastructure in order to encourage residents, businesses, and government agencies to purchase electric vehicles.

A second round of funding was awarded in June 2019, when NJDEP announced $16 million would fund electric heavy-duty garbage trucks, school buses, and port-related vehicles. In the press release, NJDEP Commissioner Catherine R. McCabe said “The projects to be funded by this second round of grants will improve air quality in environmental justice communities that have for too long have had to bear a disproportionate burden of air pollution and its health consequences.” A breakdown of the projects awarded and dollar amounts disbursed so far can be found here.

Reflecting on these first two rounds of funding, NJDEP’s Peg Hanna saw the breadth of awardee projects which ranged from school buses to charging infrastructure as a positive, since it would help provide a range of information and lessons learned across different sectors. In contrast, some of the other states had plans focused solely on one type of transportation. For example, in Washington and Rhode Island, both states chose to spend their full amount on electric buses and charging infrastructure.

Currently, NJDEP is soliciting project proposals to allocate the remaining funding, with the application deadline on July 22. Of the remaining funds, $37.2 million will be used to convert old diesel trucks, buses, port equipment, marine vessels, and trains to electric power and $7.6 million will be allocated to charging infrastructure with priority for fast charging stations. Expanding fast charging infrastructure is supported by legislation signed into law in January 2020 which aimed to address “range anxiety” by expanding the network of electric vehicle chargers across the state. Additionally, this round of funding has a special project solicitation form for eMobility projects, which would expand electric car sharing or ride hailing in low and moderate income communities that have been disproportionally impacted by air pollution.

As New Jersey works towards the goal of 100 percent clean energy by 2050 as outlined in the Energy Master Plan, the VW Mitigation Trust serves as a key source of funding to help achieve this and address the large impact the transportation sector has on air pollution in the state.